The fungus fly Sciara coprophila is a lower dipteran insect with many unique features to elucidate chromosome dynamics including: 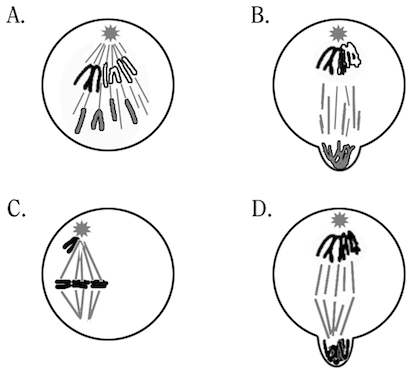 Meiosis I in Sciara males offers the only naturally occurring example of a monopolar spindle (panel A), allowing exploration of the broader question “How do chromosomes move on spindles?” Instead of random segregation of homologous chromosomes, all the paternal chromosomes move “backwards” away from the single pole and are discarded in a bud (panel B), raising the question of “How does the cell imprint the paternal and maternal origin of chromosome?” The germ-line limited L chromosomes found in Sciara all move to the single pole, posing the question: “How do the L chromosomes escape imprinting?”

An asymmetric bipolar spindle with a single centrosome forms in meiosis II of Sciara males (panel C) and all chromosomes move to the metaphase plate except for the X dyad that remains near the single centrosome. What governs non-disjunction of the X? This is regulated by a genetic locus called the “controlling element”, but how does it work?

The nullo-X product of meiosis II is discarded in a bud (panel D). Fertilization of the haploid egg by a double X sperm results in a triple X zygote. What is the mechanism for chromosome elimination in early embryos of one (in females) or two (in males) X chromosomes that are paternally imprinted and marked by the controlling element? How does sex determination work in Sciara that lacks a Y chromosome and mothers determine the sex of their offspring?

DNA puffs in Sciara salivary gland polytene chromosomes are loci of developmentally regulated site-specific DNA amplification. What is the mechanism that overrides the normal cellular controls that origins of DNA replication are activated no more than once per S phase?

The beautiful gigantic polytene chromosomes of Sciara (panel A) were the first chromosomes used to develop the method of in situ hybridization. Eyespots develop in late larvae (panel B) and correspond to stages when DNA puffs appear (arrow, panel A).

Inbred lines of Sciara have been maintained for 100 years. The many unique features of Sciara led it to be a finalist when Drosophila was chosen as a model organism in the 1930s and when C. elegans was chosen as a model organism in the 1970s. With a modern toolbox available of the sequence of the Sciara genome and transcriptome, and methods available for transformation (panel C: YFP transformants) with efficient and precise site-specific insertion of many kb long DNA, the time is now ripe to utilize Sciara as a model organism. Since mothers have only sons or only daughters, collection of virgin females for crosses is not necessary. Egg laying can be induced to obtain synchronized embryos. Larvae can survive for many months at 40C with no care at all. Workshops are given on handling Sciara and stocks are available through the Sciara Stock Center.